The Kiwis fielded three spinners Santner, offie Mark Craig and leg-break bowler Ish Sodhi, who bowled a combined 59 out of the 90 overs. 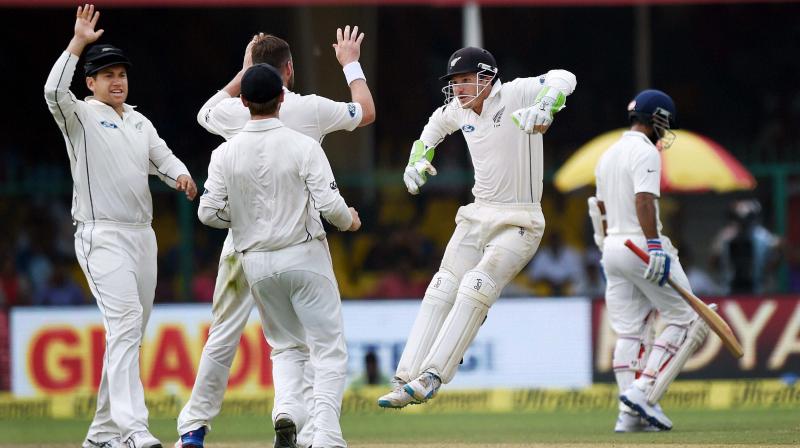 Kanpur: India frittered away a solid start, as a middle-order collapse saw them reduced to 291 for 9 on the opening day of the first Test against New Zealand despite half-centuries from Murali Vijay and Cheteshwar Pujara, at the green park, in Kanpur.

After electing to bat in the historic 500th Test, India were comfortably placed at 154 for riding on 112-run second wicket stand between Vijay (65) and Pujara (62).

However a disciplined bowling effort complemented by some inept shot selection by middle and lower order saw four wickets for 16 runs after the second new ball was taken.

Rohit Sharma (35) once again got a start only to throw it away at the fag end of the day. Ravichandran Ashwin was well set before being dismissed to a brilliant delivery from Trent Boult.

While left-arm spinner Mitchell Santner (3/77) rocked the top-order, it was Boult, who looked menacing with the second new ball, finishing with figures of 3/57 in 17 overs. All his wickets during the last 10 overs of the day. Ravindra Jadeja was batting on 11 at the end of the day with Umesh Yadav (8).

The Green Park track was not a rank turner on the first day itself but it did offer some assistance to the spinners.

The Kiwis fielded three spinners Santner, offie Mark Craig and leg-break bowler Ish Sodhi, who bowled a combined 59 out of the 90 overs.

India were comfortably placed at 154 for 1 after losing KL Rahul (32), but lost four wickets in a gap of 15 overs, spread over two sessions got them on to the backfoot.

In an important phase in his Test career, Rohit was expected to fire and he showed some early promise before trying to chip one off Santner over mid-on but was holed out by Sodhi.

The other two Indian batsmen who played poor shots were skipper Virat Kohli (9) who fell for Neil Wagner’s short ball mistiming a pull-shot.

Boult, in his final spell of the day, got rid of Ashwin wicket-keeper Wriddhiman Saha (0) and Mohammed Shami (0), nearly polishing off the Indian tail. Wriddhiman and Shami got identical deliveries that jagged back in from three quarter length, breaching their defence. Ashwin got one that was full and kicked up from good length as he gloved it to Ross Taylor at wide second slip.

7
What is Patrick Mahomes’ tax bill on his record-breaking contract?